On a warm winter evening, nothing can beat a warm bowl of noodle and soup, and one of my favorite noodle dishes is Japanese Ramen! The flavorful broth matched with the chewy but tender noodle with toppings like Tempura or Char Shu is just the perfect combination. Even though the wildly popular soy & miso broth are amazing with the curly, thick ramen noodle, my favorite on a cold winter night is a very special ramen, known is the west as Tonkotsu Ramen.

Tonkotsu ramen is a ramen dish that’s from Fukuoka, on the Kyushu island (southern end) of Japan, and it is a specialty in the region. Like many amazing dishes, like Pot-au-feu, Barbacoa, Mujaddara or Gumbo, it has a humble origin, and it is famous for the long preparation time. Invented as an affordable fast food for workers on the harbor and fish market, the soup broth is used cheap pork bones and affordable other ingredients, which is typically boiled for several hours. The dish is traditionally served with thin ramen noodles so they can be served quickly during the short breaks, and topped with sliced Char Shu, braised pork belly. In Japan, Tonkotsu ramen is also known as Hakata ramen, so when you are they, give it a try!

Today, we will make a version where most ingredients can be easily gathered in the western world, since a lot of ingredients are hard to find outside certain countries, so if you are a ramen snob or purist, please understand that even though this is not exactly the same as how they make it in Fukuoka, the flavor is similar, the ingredients are affordable and easy to find, and the most important thing of all is that it is DELICIOUS. Let’s make it! (Also, this takes about 24 hours to make, so be prepared.)

Here’s how to make one of the most iconic toppings for ramen: Cha Shu

How to make this:

All you need to do after the broth is completed is to cook some thin straight noodles, which is traditionally used at ramen shops in Fukuoka, add a couple slices of Cha Shu, Ajitsuke Tamago (Japanese pickled eggs), and enjoy!

Ps. These are the Ajitsuke Tamago (Japanese pickled eggs), I soft boiled the egg and pickled it in a soy-mirin-sake marinade for about 24 to 72 hours in the fridge.

Ajitsuke Tamago are just eggs pickled in a soy-mirin marinade 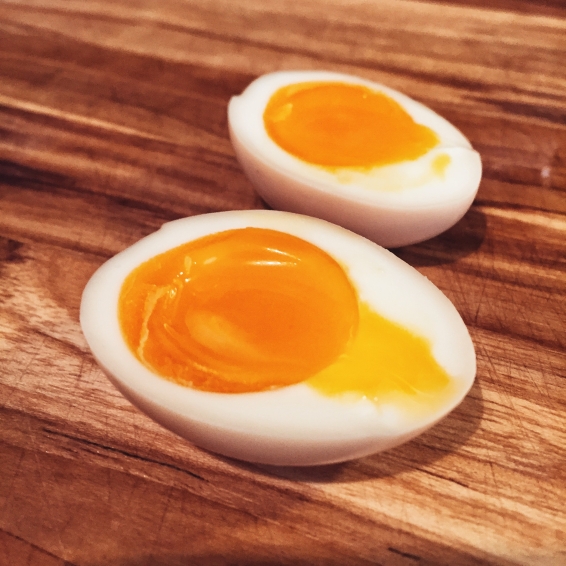 Soft boil (6 min) the egg and achieve the gooey glorious!